BOULE NOT JUST FOR MEN IN STRING VESTS... 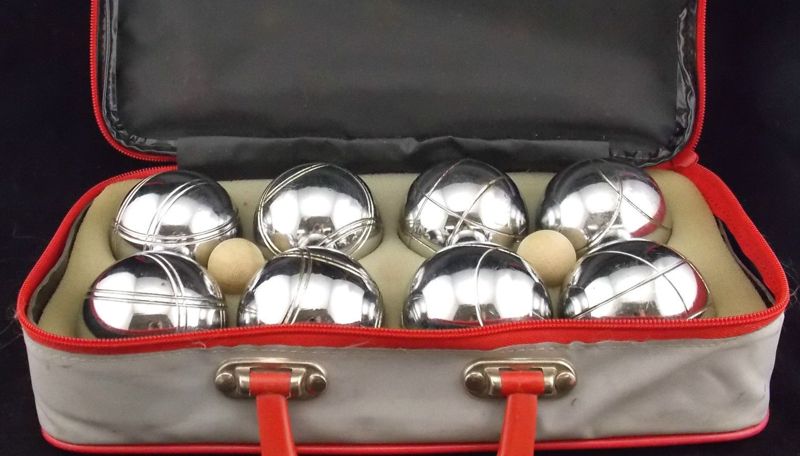 We have some beautiful boule sets available to hire. If you want to hire a petanque or boule set, you have come to the right place! Lurking in amongst our collection we have vintage wooden boule as well as metal petanque sets. These are very popular games to hire as the game is easy to play and get started with. Just decide where you can play safely, throw the jack and off you go!
Boule or petanque need to be played outside and is traditionally played all over France and the rest of the world on grit courts although there is nothing stopping you playing on grass.

This game is not suitable for playing indoors and could actually cause injury or destroy a venue in the process, and nobody wants that!
As game is usually takes 10 – 15 minutes. This is a very old and simple game but nevertheless proves a fun and competitive game for all the family to enjoy.

What do you get?
8 steel petanque Balls or 8 wooden boule balls
What is the object of the game?
To throw or toss the balls as close as you can to the cochinet or jack.
How to play – the (very) basic rules:
Form a team of either one, two or three players
A typical boule team is made up of three players and in French they are called the “pointeur” this is the player that is best at getting the boule closest to the jack. You also have a "tireur" who is an expert at knocking the opponents balls out of the way or out of play! Lastly you should have a “milieu” who is the captain and should be an all-round great player.

The first player should throw the jack. For the jack to be legal then it must be between 6-10 metres away and it should also land at least half a metre away from an obstacle such as a tree.

The first player then throws the boule to place it as near as possible to the jack. The usual way to do this is a under arm throw with back spin to place the ball.

The ball or boule closest to the jack is called “best ball”. Players must always try to achieve best ball and should keep throwing their balls until they achieve this or run out of boules to throw. Once a player has got the “best ball” then the other team or player can have their go – where they will try and achieve the same, once they have achieved best ball then the next player goes etc. The first player will only ever throw once as there is only one boule on the pitch and this will automatically become best ball!

When a player on a team runs out of boules and is not best ball the then next player in that team takes over. When all the players in a team have thrown all their balls then the other team throws all their ball in an effort to get as many as close to the jack as possible.

When all boules have been thrown the score is added up. The boule closest to the jack wins and scores one point. Additional points are scored for any other boules the winning team have closer to the jack than the opposition.
How do I win?
By you or your team scoring thirteen first.
What size is it?
Allow for a 10x2 metre area for ample playing space. Note that you ideally want to position the pitch where nobody will walk across the pitch or at the back of the pitch in case someone throws the boule to hard.

As we have already said we have a selection of amazing boule and petanque sets both vintage and new and can also provide signage and score cards. Call us to hire a boule set on 07800 802751.

Louis vitton produce a boule set in a soft leather bag which is yours for a cool £1500. If your budget doesnt stretch to that then you can just hire a set from us!
Back to top