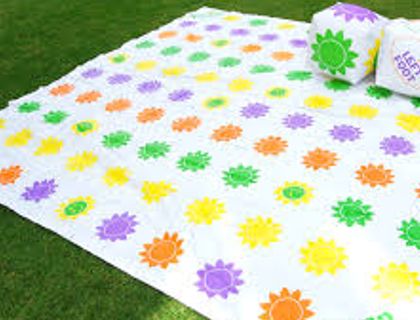 Hire our Giant ludo board for your next event.  Ludo can be played with between 2-4 players and involves racing your tokens around the board with the winner being the first player to get all their tokens safely home. This game looks great set out on a lawn and on average takes about 20mins for someone to win.  This is therefore a nice game to play at your leisure.

What do you get?
Included with the game is a giant playing board, dice, counters/tokens and pegs for the playing mat.

How to play – the basic rules.
Each player throws the dice and the player who throws the highest number goes first.

The player with the highest number then throws the dice once and if they roll a six they can place a counter on the board.

Players turn there after goes in a clockwise direction.

To get a counter into play from its staging area to the starting square the player must roll a six.  If you fail to roll a six the next player then takes their go.  Once counters are on the board you progress round the board in a clockwise direction moving the number of squares equal to the number on the dice.  If you roll a six you may choose to enter another counter into play from the staging area or move a counter on the board six places and have another go.  If you throw three sixes in a row you can’t move your counter and play passes to the next player, you cant keep on!

You must always move your counters the exact same number of squares as number shown on the dice.  If you cannot make a move then play passes to the next player.  I.e. there are three square left and you throw a four.
You can’t end your move on a square you already occupy. If you land on a square already taken by another players piece then their piece is moved back to the staging area and they will have to throw another six to get it back in play again.

How do I win?
By being the first person to get all your counters to the “home” square first!

What size is it?
The board is approximately 3x3 metres and is best suited for use on grass.

Due to the nature of these large mat playing games they are only suitable for use on grass as they need to be pegged down.
Back to top