OLD FASHIONED HOOPLA BOARD TO HIRE 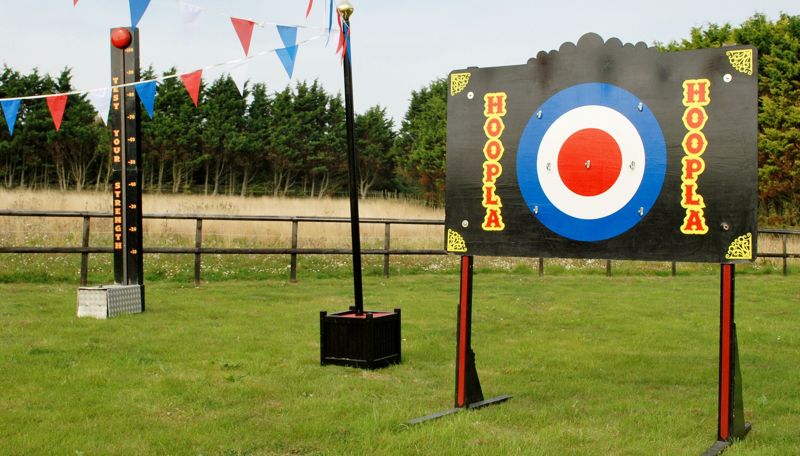 Hoopla is a fun fair game that will have you coming back to play over and over. No matter how young or old you are, hoopla will bring entertainment to anyone playing it. The prize is the ultimate goal and is what keeps the player in the game.

The goal of the game is to throw plastic rings at the target. The hoopla stall consists of five or more hoops and the hoopla board. The target is any of the hooks. This sounds like an easy task based on how well you can aim. However, the challenge comes to determining the right angle to throw the ring.

In the end, hoopla players will realize that much of the game is determined by luck. When they are successful, the person will win a prize for their accomplishment. After playing hoopla one too many times, the person may finally realize that the game is rigged against them. However, this does not account for all the fun the person and the surrounding audience experienced while playing.

Traditionally, hoopla came from a game called quoits. Quoits has a long history as far back as ancient Greece. A tale goes that the citizens of ancient Greece, who were too poor to buy real discus, made their own with bending horseshoes. This eventually spread throughout all of Europe to Britain and has now evolved into the quoits of today. Whereas quoits is still a serious game with current leagues and professional associations, hoopla is a more casual version of quoits and is slightly less competitive.

A hoopla stall is an excellent source of entertainment for any fun day, private party, or corporate or charity event. It is easy to set up and can be played both indoors and outdoors. It brings the guests together in a competitive yet fun way. It is also the perfect way to break the ice and assist your guests in meeting each other and having a grand time. Having a final prize at the end of the game also makes it a relaxing enticement to continue playing throughout the event, even if the players know their chances are slim.

All our stalls work well together. Pick and choose which elements you would like teamed with some bunting and hay bales to create the most idylic vintage fete themed wedding which makes for lovely photos and fun for your guests on the day
Back to top