WE HAVE THE SAFE VERSION AVAILABLE TO HIRE! 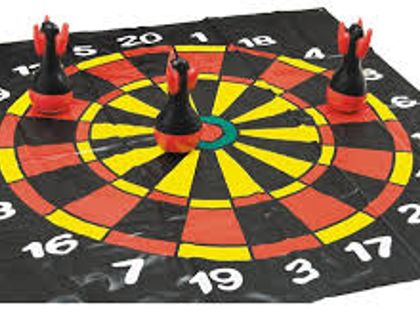 We have invested in some safer versions of this popular game. the darts are inflatable with weights in the end making for a much safer game and no injuries to worry about.

We are also in the process of getting our new hessian version of the game and will update this page very soon.

What do you get?
A plastic playing mat

What is the object of the game?
To throw the "darts" and scor the highest

How to play – the rules:
Lay the board out on the grass
Peg the board down
Mark out the oche (pronounced ockey) which is the line from which you will throw
Choose who or what team goes first by flipping a coin.
Take aim and fire at the board, you get three darts for your turn.
Add up the score and then minus it from 501, the first to zero wins
You could also do the first to get over 200

As you can probably tell we have a large amount of games avaiable to hire and our customers usually hire a few for the event they are holding.
Back to top