A POPULAR PAST TIME IN PUBS AND ON CRUISE SHIPS. 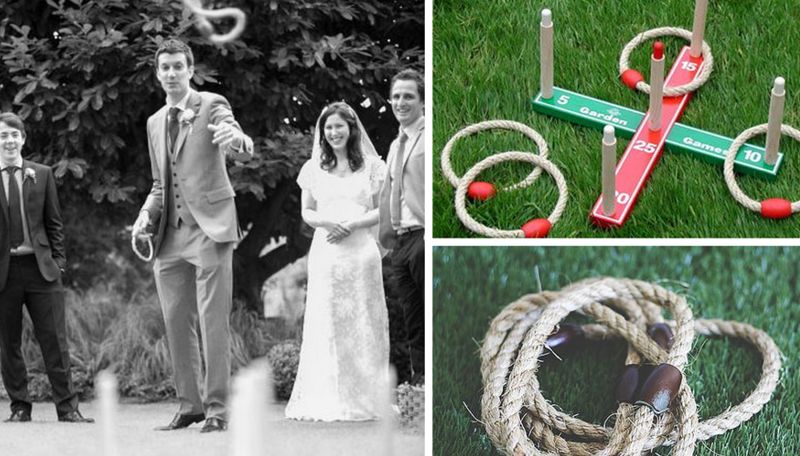 Quoits as a game dates back a long way with various forms of the game being played. It was once a popular past time in pubs up and down the country as well as being a a great deck game on cruise liners of days gone by.

Played quoits made from various materials including very heavy metal quoits this game has stood the test of time and is still a popular way to entertain and amuse.

We have a garden games version of quoits which uses rope quoits which are thrown over a wooden peg. each of the pegs has a different score. The one with the highest score from the quoits wins!Quoits is often hired out with other games to form part of our wedding games package.

Quoits has stood the test of time with variants such as ring toss and hoopla and is still enjoyed today.  We have several Davis Games Quoits sets which are available to hire either on their own or as part of a lawn games package.  Quoits can be played in teams or single players can compete against each other.
As game is usually takes about 10 minutes.

What do you get?
Garden quoits set including a peg board, quoits and rope quoits

What is the object of the game?
To throw the hoops over pegs with the highest score.

How to play – the rules:
Construct the peg board
Set out pitch, this should be about 5x1 metres with the start line pegged into the ground about 5 Metres/paces away from the quoits board.  As this is a game of fun and doesn’t have strict rules then you can adjust this to suit younger players or players of different abilities.
Ensure the lowest score is nearest the start line.
Choose who or what team goes first by flipping a coin.
The first team/player then throws all the quoits and the score is taken when this player has finished their go.  The next player then takes their turn and so on throwing all the quoits and taking a note of the score.
Scoring is mainly self-explanatory with the scores marked on the peg board, the only exception to this is if the player hoops two or more on the centre peg.  If the player hoops two on the centre peg than the score for this peg only is doubled and addred to the score, if however they get three then the score for this peg is trebled.  Guess what happens if the player manages to get all four on the centre peg…  That’s right, you’ve got it, it gets quadrupled!

As you can probably tell we have a large amount of games avaiable to hire and our customers usually hire a few for the event they are holding.
Back to top