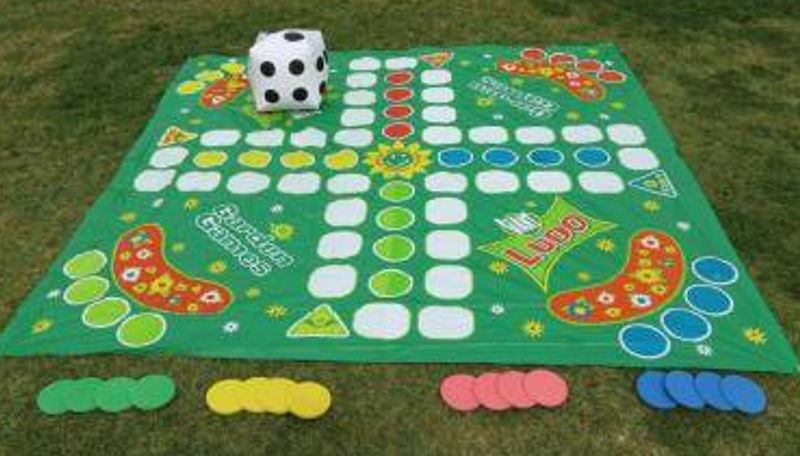 Hire a giant snakes and ladders game from us for your next party or event!  We have several huge versions of this traditional game.  The board looks great spread out on a lawn in the summer for your guests to enjoy.  This is a slightly more involved game and on average you would spend about 30mins playing.  What a nice way to spend the afternoon!

What do you get?
A large playing board and dice

What is the object of the game?
To reach the end of the game before everyone else!

How to play – the (very) basic rules:
Take the mat out the box, open it up and place it on a flat piece of grass making sure there are no sharp objects or stone underneath.  Peg the mat down and inflate the dice.
You will next need to decide who is playing and also work out in what order you will play.  To do this throw the dice and whoever has the highest number goes first, the remaining order is decided by who threw the next highest number etc.
When it is your turn to play, stand on the first square and then roll the dice.  Move forward that number of squares.
If you end up on a square that is the foot of the ladder then you can move up the ladder to the square at the top!
If you end up on the head of a snake then unfortunately you must slide down the snake to the square at the tail end of the snake.
If you land on a sting square you can swap places with another player – the player of choice is up to you.  The only rule is that you must swap, even if you are in the lead at the time!
If you land on a double dice square on your next throw of the dice, your score counts as double.  You MUST double up your score, even if it means you reach the winner square and then have to bounce backwards using the full value of the dice thrown.
If you land on a stand on one leg square then you must do exactly that until your next throw of the dice.  If any part of your body touches the ground  before you next turn, on your next throw of the dice, you must move move backwards that number of squares.
More than one person can occupy the same square at a time just squeeze up!

How do I win?
By reaching the end first

What size is it?
Allow for a 3.5x3.5 metre playing space minimum

What better way to enjoy an afternoon on the lawn than with giant draughts, tea, cake and perhaps a few choice records on the grammaphone!
Back to top