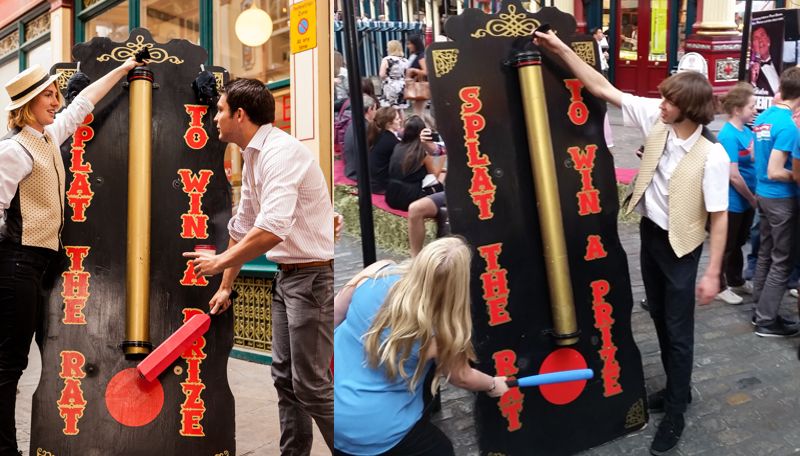 Splat the Rat, also known as Bat a Rat, is a common game often played at traditional English fun fairs and is loved by all ages. The origins of the game are unknown, but it has been around for some time now and is here to stay. Splat the Rat is simple to play and can be seen at community events, fairgrounds, corporate or charity events.

The goal of the game is to hit the “rat”, a small object with a tail when it is released out of a tube. Usually, the stallholder will do this in a way to surprise the game player. The game requires the player to be paying full attention, and even then it can be a demanding task. This is what makes the game addicting, as the contestant tries time after time to hit the target. If successful, the person wins a prize.

The setup time for this stall is quick, and it can ideally be played indoors or outdoors. All you need is a few rat-like bean bags that are heavy enough to drop down the pipe and a bat to hit the rats. The stall consists of a tube that is held up by a decorated wooden slab.

People of all ages, from little toddlers to adults, love this game partially due to its intensity of having to hit something and also because it is not as simple as one may think. Over confident players may miss the rat time after time, causing them to continue playing until they catch their target. It is also an excellent game for both the player and those watching. Everyone will have fun with Splat the Rat at your event.

Call us or email us using the form below.

This stand alone board works well in hotels and places where you havent got much space. We can hire it on its own or for maximum fun why not have one of our staff run the stall. They are avaiable in waistcoats and boaters unless you would prefer them to wear something else?
Back to top