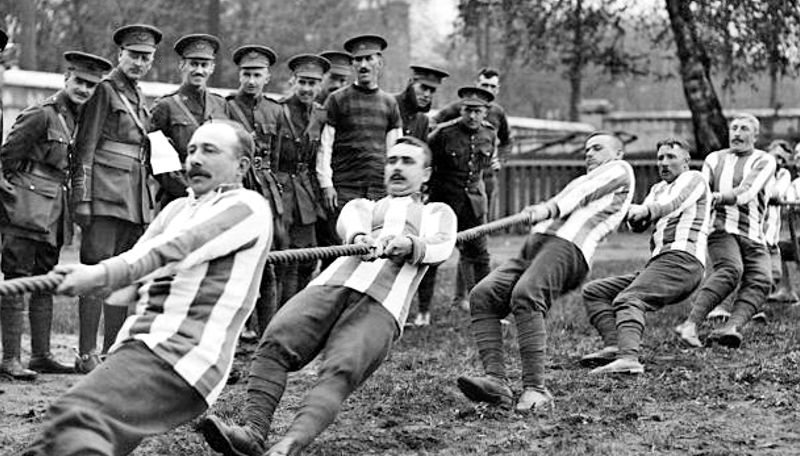 Tug of war! This is the real thing not just any old bit of rope but a proper piece of sisal at 35+ metres long with markers on the rope.

What do you get?
A proper tug of war rope with markers

What is the object of the game?
To get the centre marker on the rope over your side of the line marked on the floor usually 4 metres

How to play - we are just working on this to do a proper set of rules
In the meantime these will have to do.
Get 2 teams of 8
You can have mixed or all male or all female teams
Players usually wear rugby shirts and a decent pair of trainers - We dont mean the latest AirMax but something that is sturdy....
Once you are all ready pullers should pick up the rop at the same time with a referee in the middle to make sure the centre marker is aligned with the mark on the grass.
The puller will then be told by the referee to "take the strain"
At this point they should have a firm grip of the rope with their hands only taking up any slack in the rope and get ready to pull.
The referee then shouts "pull" at which point puller on both teams do exactly that, pull!
You basically dig your heels in and pull the rope towards you.
You cannot drop the rope causing the other team to fall over, no matter where the rope lands the team that lets go will be disqualified.
When the marker is over the line the referee will announce the winner
You may allow your anchor man, usually the biggest man, on the end of the rope to wrap the slack over his shoulder a couple of times. We did hear of it being looded round the back of a land rover tool bar at one event(they won) ... however this is not allowed!

How do I win?
By getting the centre mark over the line nearest you marked on the floor

What size is it?
Allow for a 50metre by 4 metre arena ideally. You might want to think about putting a small fence around it to stop small children getting crushed under the players or to stop unruly dogs poking their noses in. This is a serious sport you know.

As we have already said we have a selection of amazing boule and petanque sets both vintage and new and can also provide signage and score cards. Call us to hire a boule set on 07800 802751.

This is usually hired out as pert of our fairground package. if you are looking for some Victorian style fun at the summer party then pick up the phone and call us today.
Back to top